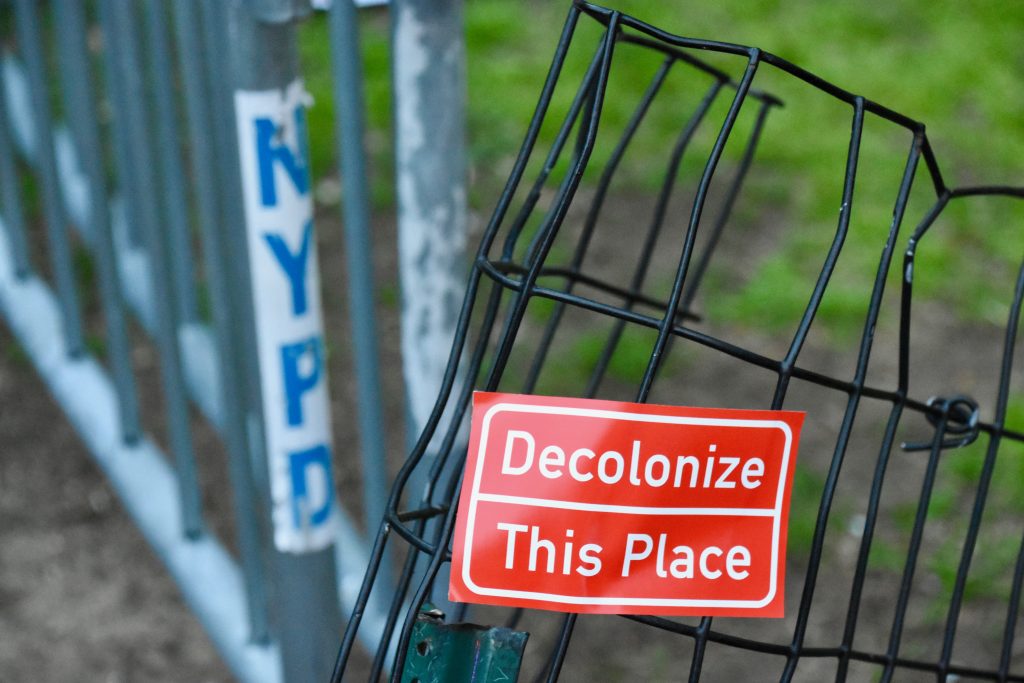 Alec Perkins from Hoboken, USA, CC BY 2.0, via Wikimedia Commons

In our current era of authoritarianism and xenophobic nationalism, the museum has increasingly emerged – like its counterpart, the monument – at the center of amplified protests against racism, white supremacy, and social inequality. Throughout Europe and North America, museums have been called to task for the ways in which imperial power has been materially and symbolically entrenched in their historical and present-day operations and physical spaces. In the same way, Confederate statues and colonial era monuments that perpetuate the hierarchies of slavery and imperialism have been passionately contested, subjected to mass protest, defacement, dethronement, and removal from public space. There are clearly many parallels between the place of museums and the status of monuments within the heightened social activism of our times. Both are targeted for their memorializing functions; both share a language of nationalism and project an iconography of power; both present narratives of conquest, and therefore incite impassioned rebuttal. And yet, the imperative to “decolonize” museums has involved rather different kinds of political strategies – ranging from demanding restitution of objects and challenging labor practices, to insisting on greater racial representation and denouncing toxic philanthropy – than the more iconoclastic call to decolonize monuments, namely, to topple racist historical figures mythologized in stone. Moreover, museums, in stark contrast to the makers of past monuments, generally perceive themselves to be dynamic producers of pluralistic cultural narratives, and oriented towards progressive social change. Thus, an urgent question that has emerged for museums in our contemporary moment is: “what role can and should museums have in the activist movements for social justice and racial equality that surge throughout our societies today?”

Suffice it to say, there is a resounding lack of consensus on this issue. Over fifty years ago, the Canadian museum director, Duncan Cameron, proposed, in an early expression of “the new museology,” a shift away from the temple model of the museum to the idea of the museum as a forum. Duncan’s critique in 1971 of the traditional approach to museums as timeless, temple-like, and spiritually elevating places, where people speak in hushed tones, was a challenge to the earlier monolithic institution, its fictive premise of neutrality embedded in self-aggrandizing stories of civilizational accomplishment. The museum as a forum, by contrast, was characterized by noise, confrontation, experimentation, and debate, and Duncan’s account of this transformation helped usher in a new role and identity for the institution in the final decades of the 20th century.  In 1997, James Clifford’s embrace of the museum as a “contact zone,” an asymmetrical yet dialogical space of encounter – in his words, “a power-charged set of exchanges, of push and pull” – continued to advance this ethical and methodological search. 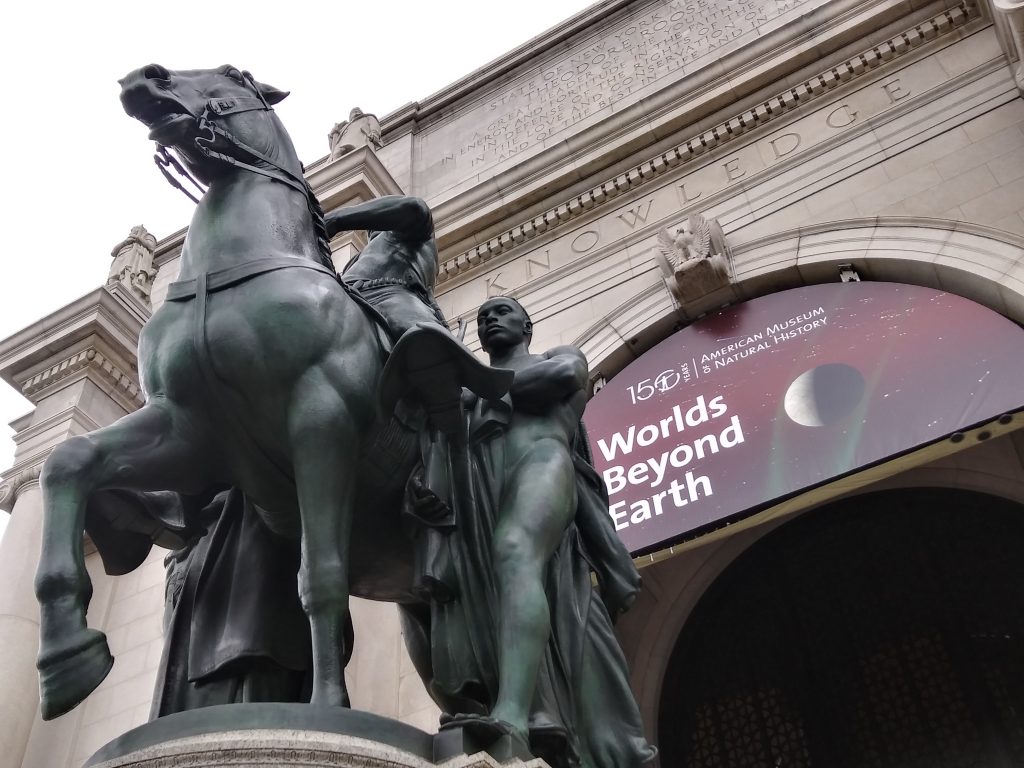 However perceptive at the time, these frameworks no longer seem adequate for grasping the more radical challenges confronting museums today. “It is not so much that the contact zone is inherently asymmetric,” as one scholar reflecting on Clifford’s definition has observed, “but that the contact zone is a site in and for the center.” In other words, the growing frustration with the neoliberal transformation of museums into corporate spectacles has led to deeper expectations and the search for a more ethical, indeed more politicized space. The protests leading to the resignation of Warren Kanders in 2019, the former Vice-Chairman of the Whitney Museum in New York, for his objectionable business called Safariland, a company that profits from making tear-gas used in state violence all around the world, is one example of this shift in expectations. Another is the rejection of gigantic donations from the Sackler family, owners of Purdue Pharma and the makers of OxyContin – a drug at the center of the US opioid crisis – by museums like the Met, the Guggenheim, the Smithsonian, the Tate, and the Louvre. These art world protests against Kanders and the Sacklers were mobilized by grass-roots activists, in part through the social movement known as Decolonize This Place, committed to speaking truth to power through strategies of exposure and public shaming via social media, twitter hashtags, and performative protests, often inside the museum itself. They also point to new kinds of accountability when it comes to the elite world of donors, executive boards, and museum philanthropy, and to altered understandings of the museum’s mission towards its public. The recent inability of the members of ICOM, the International Council of Museums, a non-profit organization that purports to represent museums world-wide, to reach a consensus on the basic definition of a museum for our times, further testifies to the idea that museums are in the midst of a new crisis of identity.

Without even a working definition, there is a growing push within the United States towards a more radical vision of the museum as a platform that has emerged in response to current political events. The hashtag #MuseumsAreNotNeutral, for instance, has been engaged more than a million times by museum curators and educators on-line, according to artist/activist, La Tanya S. Autry, and Museum Educator, Mike Murawski. They helped spearhead the “Museums Are Not Neutral” movement in 2014 in response to the protests in Ferguson, Missouri against the murder of Michael Brown and other police killings of African-Americans in the United States. “Social justice practice requires taking a stand….It is everything that neutrality is not,” states Kayleigh Bryant-Greenwell, who is the Head of Public Programs at the Smithsonian and a vocal advocate of museum “non-neutrality.” A parallel initiative under the banner of MASS Action, an acronym for the “Museum as a Site for Social Action,” was also catalyzed by political events exposing the social injustices of race in America. Its organizers point out that, while over 500 museums issued statements of solidarity with Black Lives Matter following the murder of George Floyd, most of them had not yet faced the inequities within their own institutional structures. MASS Action thus insists on the need for structural change within the institution and profession as a crucial part of the museum’s politics of representation. Within the arena of contemporary art, the call for a practice of “curatorial activism,” defined by one writer as a practice committed to “insurrectionist initiatives that are leveling hierarchies, challenging assumptions, countering erasure, (and) promoting the margins over the center…,” is equally emblematic of the moment. 1

These robust, multiple, and polyvocal forces represent, at the very least, a kind of churning of the museological status quo. And they co-exist alongside other recent phenomenon that further point to a climate of reinvention and change. In Europe, for example, there appears to be a new willingness on the part of museums to confront the colonial contexts of their collections, and to begin a dialogue with the countries or communities in which those collections originated. The latter is what the authors of the 2018 Sarr-Savoy Report, commissioned by French President, Emmanuel Macron, concerned with the restitution of cultural objects to sub-Saharan Africa, describe as a “relational ethics.” In a region in which 60% of the population are under the age of 20, the authors of the report make a poignant argument for the rights of Africa’s youth to have access to their material past:

To fall under the spell of an object, to be touched by it, moved emotionally by a piece of art in a museum, brought to tears of joy, to admire its forms of ingenuity, to like the artworks’ colors, to take a photo of it, to let oneself be transformed by it: all these experiences—which are also forms of access to knowledge—cannot simply be reserved to the inheritors of an asymmetrical history, to the benefactors of an excess of privilege and mobility.

Significantly, the Sarr-Savoy report has led the French government to legislate the return of 27 African artifacts housed in French museums since the colonial era to Benin and Senegal within one year. Although this act of repatriation barely dents the some 90,000 African objects that remain in French institutions, the gesture represents an important beginning, and an expression of a will towards change at the level of national policy. 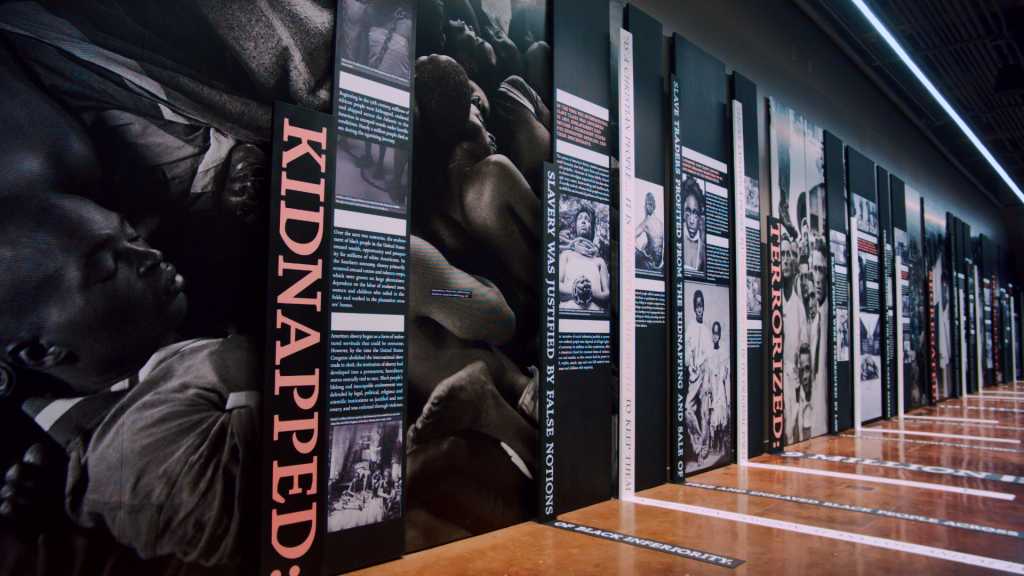 Elsewhere in the world, spectacular new museums – like the Louvre, Abu Dhabi and The New Acropolis Museum in Greece, established in 2017 and 2009, respectively – issue unprecedented challenges to the dominant model of the Enlightenment-era universal survey museum born out of the European city in the heyday of empire. The former is based on a contentious 30 year lease with the French that allows the United Arab Emirates to use the Louvre name and brand for a boggling price, reportedly in excess of one billion dollars. And yet, the Louvre Abu-Dhabi’s carefully curated permanent galleries narrate an anti-hierarchical and non-Eurocentric approach to art history unlike anything seen before and, supported by architect, Jean Nouvel’s, dramatic light-filtering building, manages to realize the museum’s self-defined mission to “see humanity in a new light.” So too does the New Acropolis Museum in Athens which houses all the archaeological artifacts found on the ancient Greek hill-site of the Acropolis. Its ingenious multi-level display and use of glass allows visitors unprecedented lines of sight, from an active archaeological excavation beneath the building to the iconic remains of the Parthenon above. As well, the museum’s 3rd floor Parthenon Gallery makes the most devastating, indeed unarguable, case for the British Museum to return the marble frieze and metope panels that were unjustly severed from the building by Lord Elgin and his crew in the 200 year history of that infamous repatriation dispute. Returning to the United States, the two most recent additions to the behemoth network of the Smithsonian Institution, namely the National Museum of the American Indian and the National Museum of African American History, which opened in 2004 and 2016 respectively, are also provocative, high profile gambits on the overdetermined stage that is Washington, DC. Whatever one thinks of these much-debated institutions, they represent inventive responses within the US to the legacies of settler colonialism and the racial hierarchies of slavery, two historical experiences that uniquely shaped the way the institution adapted to North America when it was imported from Europe in the late 18th and early 19th centuries. The most powerful example of this reinvention is surely the Legacy Museum and the National Memorial for Peace and Justice, which opened in Montgomery, Alabama in 2018. The potent manner in which the museum and monument are co-joined here, in the form of a memorial to the racial terror of lynching in the US South and a museum built on the site of a former slave warehouse, brings us back full circle to the possibilities of both forms in the struggles for social justice and racial equality today.

How do we separate the threads of all this energy at the grass-roots, institutional, national, diplomatic, and state levels that has been transforming museums all over the world at precisely the same moment of their shutdown due to Covid? I think we do not. The challenge is to understand their complicated entanglements, both locally and globally, and to envision a more synthetic approach to the crucial place of museums in our post-Covid future.