The Right to Sex: Interview with Amia Srinivasan 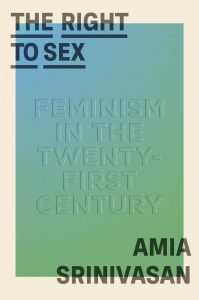 What is the promise of the academic institution as a crucial avenue for affecting transformative practice? Such is a refrain that guides our work at UCHRI, and inspired our reading of Amia Srinivasan’s The Right to Sex. Captured by her 2018 piece in London Review of Books—”Does anyone have the right to sex?”—we asked Srinivasan to think with us about the role of pedagogy in setting up our rights to desire. If Srinivasan’s essay in LRB—now the eponymous and central essay of her first book—confronts the move from theory to ideology, the “ideological shaping of desire,” as she writes, then The Right to Sex takes fast the baton, tracing the causal progression from thought to ideology, ideology through to practice. Specifically, The Right to Sex sources ideology’s move through its dissemination, reification, and unpacking: what it means to be taught and to teach, who (or what) is instructing whom and how. And, in the case of the book’s second chapter, “Talking to my students about porn,” whether one world of instruction can amend or make up for the mishaps and disasters of another.

Certain dominant social institutions receive a keen and swift interrogation in the book. Abortion, prostitution, and the movements to abolish them constellate to keep desire and the rights thereto in limbo because desire and politics are presumed to be inextricably linked. Like pornography in the classroom, the push to adjudicate sex and desire keeps open the question of whether one form of ‘instruction’ can make up for the errors of another. Are we ever really free to choose, or are we in perpetual instruction, even consenting to those activities that we may find undesirable but regardless feel compulsory? The Right to Sex reveals our bittersweet connection to desire as a means of maintaining balance and freedom within the confines of civil society.

“I am asking that we do not confuse the necessities of negotiation under oppression with the signs of emancipation.”

How does your book’s call for radical social restructuring sit alongside your investment in pedagogy, considering how resistant higher education often is to systemic change? In other words, why not blow up the academy?

The university has a complex relationship to social change. On one hand, as you say, it can be, often is, a conservative institution, especially when we are talking about elite universities – just as much machines for credentialising elites and reproducing class hierarchies as places of free inquiry. And yet, universities, even elite ones, have so often given young people the space and time to radicalise, take to the streets, organise. And I deeply believe that flourishing, democratic societies must have institutions that are dedicated to the pursuit of truth and knowledge, for their own sake. For me the question is how to democratise these institutions, not destroy them. I fear that if we blew up the academy, what would be rebuilt in their place would have all the vices of the modern university, and none of its virtues.

What constitutes a free subject in the landscape you’ve outlined in the book?

I think of political freedom as a horizon of struggle, not a definable end-state. What does it take to be really politically free? I don’t know, I say; part of the point of feminism, in its own most radical form, is to embrace the imaginative, experimental social processes that might yield surprising answers to that question. But I should say – and I now wish I had made this clear in the book – that I don’t think that political freedom suffices to create a ‘free subject’. We can have an end to practises of political domination and yet be personally unfree – trapped, for example, in fantasies of invulnerability and immortality, unreconciled to our finitude and the deep tragedy of human life. There are of course connections between personal and political forms of unfreedom – forms of psychic entrapment that are essential to malignant political formations – but it is hardly the case that we’d all be ‘free subjects’ if democratic socialism were achieved.

What is left of desire after factoring in its political critique via feminism?

My answer to this question is similar to my answer to the previous question: we don’t know. Let’s try and see! But I can say this. Ideology is never fully successful; desire often exceeds and escapes its grasp – think about homosexuality and other dissident forms of sexuality. One is tempted to explain this by positing a spontaneous, pre-political, ‘natural’ desire that transcends political formation. I don’t think this can be right: homosexuality and other forms of dissident sexual desire are also shaped by social and political forces, just in ways that cannot simply be read off the reigning, dominant ideology. And then there are all those very important but at least overtly non-political forces that shape our desire: for example, formative childhood experiences.