How to Loot Democratically

The ‘great criminal’ voyou thus rises up, in an insurrection of countersovereignty, to the level or height of the sovereign state; he becomes a counter state to rival the sovereignty of the legal or putatively legitimate state, which is in a position of monopoly and hegemony.

The Pakistan Tahreek-e-Insaf (PTI) party came to power last summer in Pakistan’s general election. While the PTI dates back to the mid-1990s, the party’s mass appeal crystalized in 2011 when it held unprecedentedly large rallies across the country. In December of that year, for example, a rally in Kasur (a small town near Lahore and the border with India) saw 35,000 people attend. So large was the crowd that the PTI bought thousands of plastic chairs for the audience. Some reports put the number of chairs at 15,000.

The Kasur rally was exceptional not because of its size so much as how it concluded. As Imran Khan wrapped up his speech, the attendees began stealing the plastic chairs. Not one or two chairs here or there, but all of them. News footage depicts frantic, dusty scenes of looters stacking multiple chairs, flipping them over and carrying them upside-down above their heads while awkwardly running off into the streets. Some other items were also reportedly looted—a few carpets, some party flags, and some posters of Imran Khan. But other more valuable commodities were left alone: microphones, speakers, lighting, party-owned vehicles—none of them were touched. Instead, it was the humble plastic chair that took center stage.

An ARY News anchor and reporter discuss the looting at Kasur. The reporter, who was at the scene, details what happened during the rally, what Imran Khan spoke about, and events after the onset of the looting. Though at first only a handful of chairs were stolen by a few people, “at once the entire crowd started looting the chairs.”

Responses to the Kasur rally were predictable. Some used it as an opportunity to criticize the PTI for not having enough chairs for their supporters, others saw it as symptomatic of the danger posed by PTI’s populism, and many hung their heads in embarrassment at the spectacle. Imran Khan used it as an occasion to showcase the impoverishment of the country. The 15,000 chairs, he seemed to suggest, were in fact PTI’s gift to the people of Kasur. His claim to benevolence, in fact, appropriates, defangs and ultimately domesticates unruly looting for the party’s ideology.

But why loot plastic chairs in the first place? The chair, no doubt, holds some exchange value. And this value can be multiplied by the very quality that makes plastic moulded chairs so cheap: light and stackable, plastic chairs can be transported and distributed with exceptional efficiency. It is with profit as it is with loot. For these are the very affordances of the plastic chair that were exploited by the Kasur looters, who stacked, flipped, and transported them en masse. And while the looted chairs have use-value, it is also the case that there is footage (grainy though it is) of broken chairs—with damaged backs, and most perplexingly, with broken or missing legs. Such useless-value suggests not a different, but a supplemental logic for understanding the significance of the loot. That the object looted is a chair is significant for it is a symbol of political representation—it has symbolic value. Beyond material value, the figure of the chair lends itself to the familiar symbolism of political representation. Days before his ousting, Zulfiqar Ali Bhutto famously declared that his “seat” was strong and wasn’t going anywhere. He never returned to his furnishings, material or symbolic.

Moreover, the irony of looting at a PTI rally is that the party has long characterized the establishment (specifically the Pakistan Muslim League [Nawaz] and the Pakistan People’s Party) as “looting” the country through corruption. But at the PTI Kasur rally (or any other rally), never is there any provocation to loot. In other words, at Kasur the PTI’s supporters transform the leadership’s rhetoric about looting into an actual practice of it—they indeed behave like PTI’s opposition. The chairs at the rally were the material basis for the political theater on view—the audience. And yet it is this very basis that is looted out of the spatial and political confines of the grounds where the rally was held. As though mocking the theatricality of politics, the looters cast their vote by appropriating the symbol of political representation, literally turning it on its head, and absconding with it for themselves. But far from selfish, the very act of theft obscures, if not erases, the thieving self. Inverted, stacked, bobbing up and down rhythmically, the chairs hides the faces of the looters. Legs in the air, legs on the ground, these roguish citizen-chairs make clumsy progress towards the street. Looter and looted become one, as though the theft of political representation hides the visage of the subject, thereby rendering him anonymous. Indeed, the very protocol of looting in this case mocks the liberal myth of political representation. Lacking a particular identity, each looted citizen-chair is but an anthropomorphic figure of political representation, only now running in blatant disregard for the party that mediates between the mass and the state. This is democracy at its most roguish. 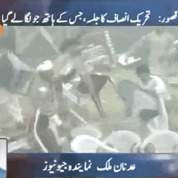 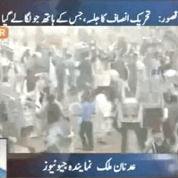 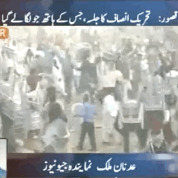 It is impossible to interpret the Kasur incident in isolation of the global practice of occupations proliferating at the time. For 2011 was the year of Occupy, which itself had been foreshadowed by prior mass-movements in the Middle East and North Africa. These movements were (and remain) expressions of ambivalence towards statist political representation. Kasur, like Occupy was explicitly public. Both were popular. Both were carnivalesque. And both unsanctioned by the state. However, Kasur doesn’t express any desire “to occupy.” Rather, it (literally) mobilizes the chair as a figure of political occupation. For why limit yourself to a park, square, or plaza, when you could occupy your home, street, or public park, sitting in a chair that no longer belongs to the party you fleetingly support? Occupy, the Kasur episode seems to suggest, need not be anchored in a place, the space of political theater, but could literally take place everywhere you want to sit down. In doing so, the looters call the distinction between “occupation” and “representation” into question. If one of the criticisms of Occupy has been the refusal to put forward policy changes (to engage the state by way of political representation), then the event at Kasur suggests that political representation now looks like occupation, be it by political leaders or those “occupying” the public.

While tragedy is typically said to come before farce, the tragedy of the PTI (its decline today at the hands of a well-intentioned bourgeoisie that has not yet lost faith in an ill-intentioned IMF) was preceded by farce. For in the Kasur episode we find a practice of mass party politics that, once the spectacle of liberal representation is over (speech-giving, rallying, promises), turns its back on the party and the state, absconding with its material and symbolic power, leaving its benefactors with nothing. The spectacle is not the looting, but the occasion of political representation, now mobilized into a carnivalesque scene that eludes bourgeois intelligibility.

This is how to loot democratically.