Seeing and Not Seeing the Dead

Cholera was the most feared pandemic disease of the nineteenth-century West. It made its way there via travelers, military and commercial, from India through eastern and central Asia and the Middle East. It got to Moscow in fall 1830; to Germany the next spring and on to France and England by the fall of 1831. By Summer 1832 it had crossed the Atlantic. Pandemics moved more slowly in the age of sail.

Those who got the disease died horribly within days or even hours from uncontrollable diarrhea and vomiting; their bodies turned a sallow pale blue. Thirty to fifty percent of those who got cholera died: 30,000 people in Great Britain in its first wave, 1831-32, the equivalent proportionately of more than 800,000 in the US today. 20,000 out of a population of just over 600,000 died in Paris, only 30% fewer than died from Covid in New York with its population twenty times as large as Paris was. And cholera kept coming back: in 1849, in 1863, in 1881, and—weakened—in 1899. (It is rare today in the developed world and those who get it survive if they have access to antibiotics). 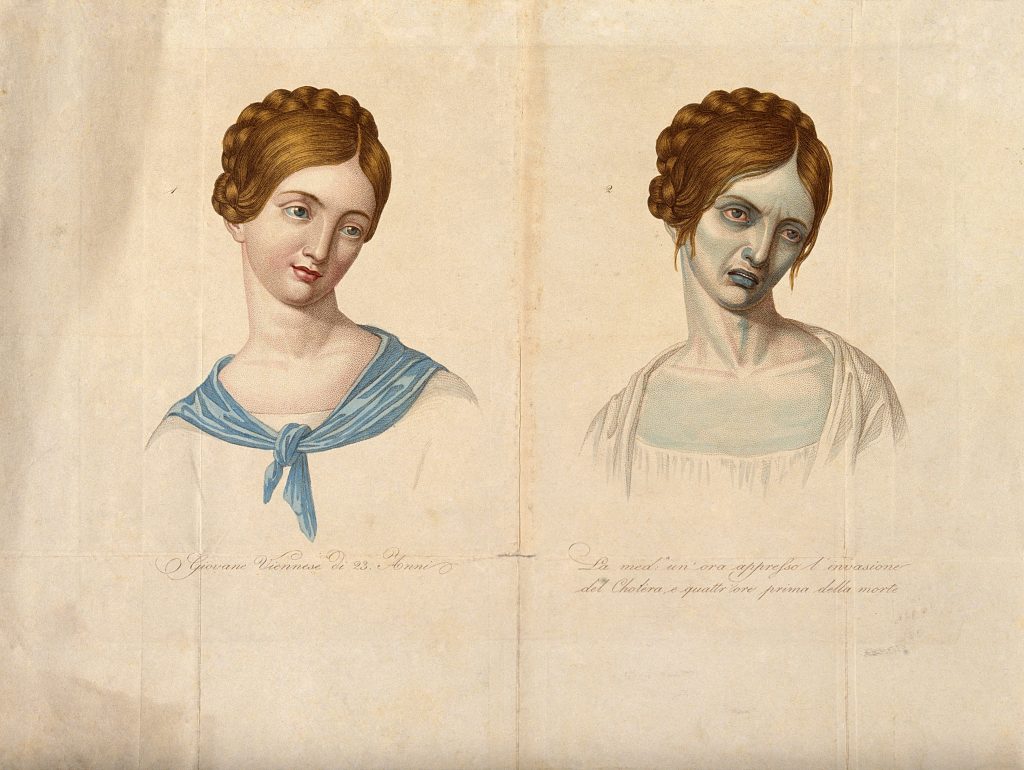 A young woman of Vienna who died of cholera, depicted when healthy and four hours before death. Colored stipple engraving. Credit: Wellcome Collection

Images of death were commonplace in fictional or semi-fictional accounts of historical pandemics like Manzoni’s much translated The Betrothed or Defoe’s Journal of the Plague Year. And magazines and newspapers produced an elaborate visual record of cholera. Contemporaries could not miss what pandemic disease wrought: dead bodies one by one and in mass.

We today have nothing of this sort for the Covid pandemic; our newspapers reprint the images from the nineteenth century. We also have nothing on the scale of the photographic record of the AIDS epidemic of the 1980s that transformed what had been a side-lined boutique disease of marginal communities—gay men and, more hidden, intravenous drug users, hemophiliacs, and women who were sexual partners of those with the disease—into a national scandal that demanded action. The bodies of the sick and dead of Covid today are present in second order representations at best: refrigerated containers that, we are told, contain hundreds of bodies on ice awaiting burial by overworked undertakers; rows of coffins in a church or gymnasium; individual blue draped sick people in an ICU surrounded by medical personnel in hazmat suits. 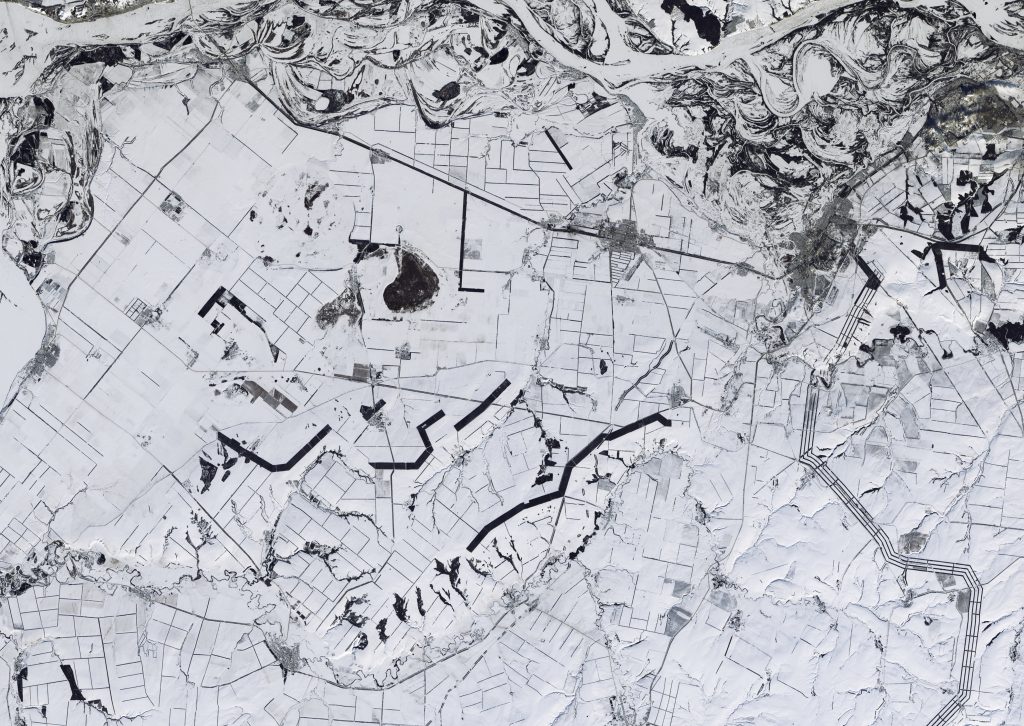 Mostly Covid is present to us as third order abstractions: statistical aggregations; little red squiggles pointing up or down, country by country state by state, county by county; ever shifting hot spot maps; intellectually demanding articles that ask readers to master sophisticated statistics that predict the future predations of the virus. It is a social science mediated pandemic; bio-statistics and epidemiology are its media. Both, I might add, are nineteenth-century disciplines and there were plenty of beautiful graphics of disease back then but there was more.

In part we imagine the fruits of our pandemic because the dead are generally far more hidden than in the nineteenth century or even than they were when I was young. Back then there was still at least a public geography of the dead; one used to see funeral corteges of cars, their headlights lit, as they escorted a body to the grave.

And, the social isolation of dying in our times makes it difficult to imagine the deaths of hundreds of thousands from Covid or any disease. This, of course, is not a unique problem of our times or this pandemic: Kant called it the problem of the mathematical sublime. The arithmetician has no more difficulty in principle comprehending one death than 205,000—the number who have died from Covid in the United States on the day I write this—or 999,000, the number of deaths world-wide up to September 28, 2020. At a purely cognitive level, any number can be understood by adding, unit by unit, to the unit that comes before. But for Kant, the ability to take in great magnitudes—to feel their sublime terror—is ultimately an aesthetic act and one which depends on gaining the right distance from the subject. Too close and we see only case by case without taking in the enormity of the whole; too far away and we lose the sublime wonder predicated on the sense that a vast assemblage is made of people just like us.

“Mostly Covid is present to us as third order abstractions: statistical aggregations; little red squiggles pointing up or down, country by country state by state, county by county; ever shifting hot spot maps; intellectually demanding articles that ask readers to master sophisticated statistics that predict the future predations of the virus.”

Bodily reality for us is hidden behind numbers and epidemiology. I am embarrassed to admit that I had a conversation with an undocumented Salvadorian friend in which I asked him why he thought migrant laborers, who, after all, worked outdoors and at a distance from one another, were so heavily affected by Covid. Because, he said, discreetly not calling attention to my naivete, they slept fifteen to a motel room that they had to pay for themselves, different people on different nights, in order to save money. I have not seen a visual image of this reality; nor a picture of a farm worker dead from Covid. 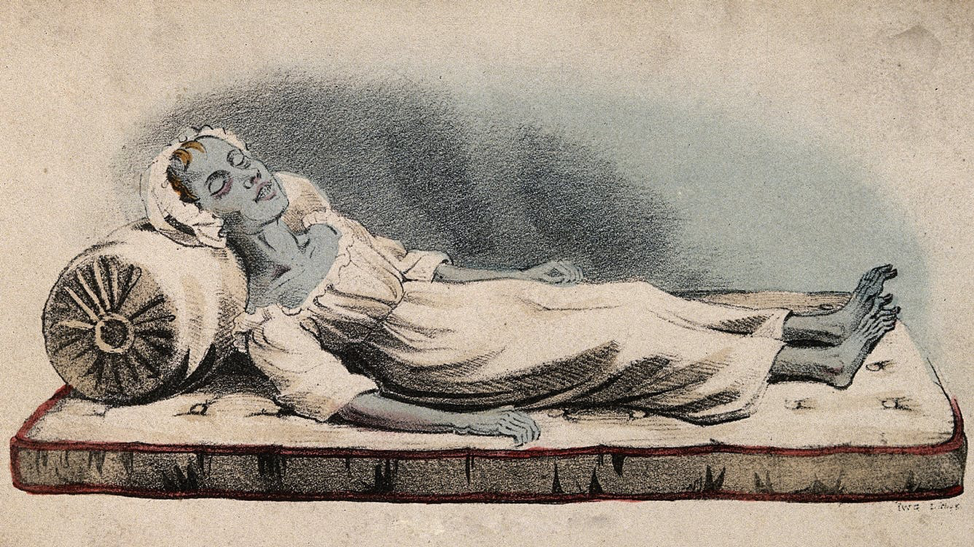 A dead victim of cholera at Sunderland in 1832. Colored lithograph by IWG. Credit: Wellcome Collection

It is the role of the humanities and arts to connect the reality of the dead with statistics and science. Covid has not had its AIDS moment. It has not found its David Wojnarowizc, whose paintings and photographs of AIDS—canonically that of his friend Peter Hujar—changed how we saw a disease many refused to name or acknowledge. We have no photographs like that by Therese Frare (1990) of the emaciated David Kirby lying on his death bed being hugged by his father who leans over him while his mother embraces a frightened young girl to the side.

Maybe we were compelled to see, if only in our minds eye, the bodies of the dead of cholera in the nineteenth century and of AIDS in the twentieth because these diseases so dramatically ravaged their victims. Bodies like theirs demanded representation. Covid is more discreet. But we—and I mean here those of us in the arts and humanities—should not leave the hundreds of thousands of our fellow citizens as no more than numbers on charts and graphs.